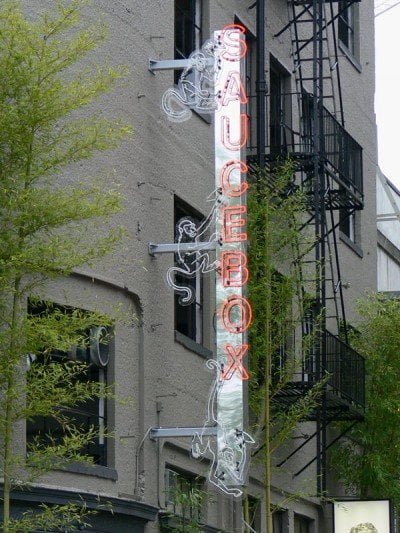 Joining Bluehour, Saucebox, the restaurant from Bruce Carey and company, has closed.

From the day it opened in 1995, Saucebox was a hit. Under the experienced eye of Chris Israel, the kitchen turned out excellent food with unusual twists for that point in time. Drink concoctions by Lucy Brennan were remarkable, the atmosphere chic, and crowds flocked to it every night. Chris eventually left for New York City, and Brennan left to open 820 in North Portland. Though they struggled to keep their footing, ever since the restaurant quality has ebbed and flowed like the tide.

I gave it a somewhat negative review in 2005, which was ignored. Then Nancy at Willamette Week gave it a poor rating a few days later. The resulting tirades were so bad, you might have thought she’d shot the chef. She got really nasty letters from the owners. I got similar letters. The Oregonian rushed in with a suspiciously good review. A few weeks later, someone else at the Oregonian gave it a bad review. Everyone piled on and I posted many of the details and letters along with some scathing criticism of my own. Both Nancy and I were banned from their restaurants. The chef soon departed to “spend more time with family”, and shortly thereafter, came the announcement that chef Chris Israel would be stopping in to “tweak the recipes”. To this day, my roundup is one of the most-read posts on this website. If you’d like some entertainment, you’ll find it here.

I went back to Saucebox in 2006 and greatly improved, so I reviewed it again, if nothing else than to make the point that this wasn’t some personal vendetta on my part. Back again in 2014, I had a horible dinner and added a disclaimer to the 2006 review, something I rarely do – “We tried five dishes and were served what can only be described as some of the worst food I’ve had in a Portland restaurant. Pad thai with the texture of baby food. Spring rolls that were worse than something you’d find in the freezer case of your local grocery store. Even an order of french fries had little flavor except for the box of salt that was dumped on them.”

Some will say I shouldn’t bring all of this up in the obituary of a restaurant. But this was a big deal at the time. And though this website might not exist had it been for the fusilade of emails that resulted from the reviews, I’m still smarting from the reaction for what was an honest, detailed review.

Anyway, here is the closing statement on their website –

After 25 years of consistently satisfying the thirst and the appetite of thousands of loyal devotees, Saucebox is giving in to the effects of the pandemic and will not reopen. We sincerely appreciate the love and support we have felt over the past couple decades from people of all varieties and backgrounds. We know you will miss Saucebox, just as we will miss you.

I will miss those early halcyon days at Saucebox. I’ve had some great dinners there over the years, and will always remember the Javanese Salmon dish from their first year. Best of luck to all of their employees.