A Farewell to Pok Pok [from Andy Ricker] 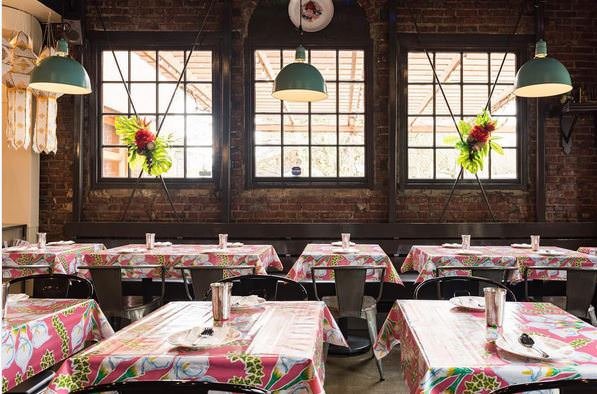 From Facebook: It’s Loi Krathong in Thailand, a festival where one floats a small boat made of a slice of banana trunk and decorated with folded banana leaves with a candle on it and other offerings down the river, carrying away your negative thoughts and transgressions from the year before. It seems like a good time to write this letter and float it out into the world.

Fifteen years ago, (give or take a week or a few; the exact date is lost in the sands of time) Pok Pok opened on Division street as a shack with a grill out back and a tiny prep kitchen in the basement of the house next door. My plan at the time was to cook the food that I had been studying for more than 20 years during my stays in Thailand and travels throughout the surrounding region, for whoever might be interested. The hope was that I could live in the house, make enough money to shut down and travel in the winter and eventually move to Thailand for 6 months of the year and even further down the line to live in Thailand full time. But, as the universe has taught us in2020 in a very painful way, things don’t always goas planned…for better and worse.

Pok Pok has had its share of better and worse over the years, more better than worse. It was amazing when we hit 10 years in business; this is a milestone that is seldom reached by restaurants and to be going strong then made me feel like maybe 20 years in business was achievable. But the truth of the matter is that for the last 5 years it has been a struggle for many reasons (Other restaurateurs know the list) and the onset of global pandemic made it very clear that the business was not going to be able3 to survive the economic realities were are all facing.

Add to this the fact that as financial and operational difficulties increased, the ability to focus on the raison d’etre of Pok Pok became more and more impossible and it became more and more about numbers, logistics and putting out fires, less and less about hospitality and vision.  I swore when Pok Pok opened that if it ever reached the point where it was all about profit and loss, I would shut it down and walk away. I have far too much respect and love for the food and culture of Thailand for it to be solely about the commercial aspects of the business. Fuck that. So when Covid made it ALL about the bottom line that was my cue to pull the plug.

No sense going deeper into debt in order to survive and then spend the next several years focusing on trying to make money to pay it all back, or to NOT survive and face financial ruin so deep that coming back in any form could never be an option. However, as a chef and a small business owner, the survival instinct is pretty strong. Holding onto hope for some sort of resurrection post Covid was so tempting because that is what we do…we keep going, no matter what, until it is impossible to do so (often far too long after it is wise to do so). But I know when I am licked. And I am licked.

S that’s it: Pok Pok in Portland is no more, dunzo, kaput, pit moth laew; it is an ex-parrot. All properties we formerly leased have been transferred to new operators or returned to landlords in orderly fashion. The property where the original location of Pok Pok stands on Division Street is for sale, lock stock and (literal) fish sauce barrel, ready to rumble. I think it would be a good investment for some young chef full of piss and vinegar to actually own their restaurant as I have (no landlord to negotiate with!) and post-Covid Division Street is going to be cracking again. But I am too old and tired to carry on and, though I feel like we did our best to foster a good work environment, my backed-in-from-40-years-in-the-industry ideas about how a restaurant should be run need to be reimagined by the…

In this unforeseen twist of fate that Covid was wrought, I have achieved a  goal set for myself back in 2005, albeit a bit sooner than planned: moving permanently to Thailand to be with my wife and cats on our little farm in a tiny village outside Chiang Mai where we live a simple life, eating from the gardent, battling the weeds and leaves and spending time in the kitchen. Thailand, though deeply affected economically by the pandemic, is a somewhat of a crossroads culinarily speaking (and otherwise if you watch the news); it is an exciting time to be here to witness younger Thai chefs moving their cuisine into the 21st century with skill, care and a sense of history. To be here for it, watching and peripherally involved, is both a joy and an honor.

Over all I am very proud of what was accomplished at Pok Pok and how we may have contributed to the conversation about the food of Thailand in Portland and elsewhere. If there are any regrets, they are mostly around the fact that (pre-Covid) we employed more than 160 souls who we had to lay off as the businesses closed. Many had been with Pok Pok for years, made friends, met their partners, started families, bought houses from their income, supported relatives in faraway places, left their blood, sweat and tears on the floor. Many others passed through over the years. To them I owe a debt of gratitude and wish them best of luck, health and happiness in the future and hope they are proud of what they earned, accomplished, learned and passed on to others while in our employ.

To the people of Portland, thankyou for the years of support and custom. I will miss you and the city. To my fellow restaurant industry professionals, sus u khrap (keep fighting)! See you on the other side.