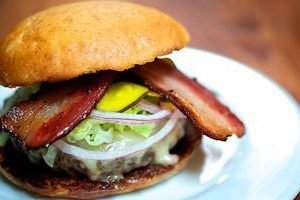 News from Toro Bravo Inc today. Third n Tasty was supposed to open in McMinnville as the second child in the Tasty n Sons restaurants. But due to changes in John Gorham’s health – he’s currently being treated for a brain tumor, and “our understanding of the region and its needs” the restaurant concept has instead been flipped to a second branch of Bless Your Heart Burgers, the popular restaurant in downtown Portland’s Pine Street Market.

BYH Burgers is inspired by Drew Sprouse and John Gorham’s home states of North and South Carolina, featuring classic Americana cheeseburgers and fries with flavors to take you back to your childhood. The BYH menu in the Atticus will include all of the favorites from the original BYH Burgers location in the Pine Street Market and be expanded to include biscuits from Tasty n Sons and Tasty n Alder, pancakes, granola, soft serve ice cream, sandwiches, and a signature BYH radicchio salad. Jamal Hassan will curate the bar with a strong whiskey program, throwback slushies, and draft cocktails with fun and playful riffs on well-executed classics. The bar program will also rotate local Willamette Valley wines on draft and offer a $5 corkage fee to show our support of local winemakers.

“In light of recent developments with John’s health, and our understanding of the region and the needs, we’ve evolved our restaurant concept,” said Renee Gorham, Vice President of Toro Bravo Inc. “Bless Your Heart is a Toro Bravo company now under the leadership of Drew and Jamal. Together, we had the fun idea to bring Classic Americana burgers to one of the best small towns in the country. Although a Southern concept, burgers are very Oregon and in sync with the Atticus’ goals of providing a welcoming and indulgent experience. And, with the hybrid model of offering Tasty inspired breakfasts, guests and visitors alike will experience the best of Toro Bravo Inc.” Atticus Hotel Co-owner Erin Stephenson said, “We are very excited to continue to work with the same world class restaurant group, and to bring in a restaurant that has seen rave reviews like Thrillist’s ‘31 Best Burger Joints in America.’ We also see this as a very Oregon experience. Gourmet food in a fun and playful setting.”

Toro Bravo Inc veteran and BYH Burgers chef/partner Drew Sprouse jumped on the chance to bring BYH Burgers to McMinnville. Drew has been with Toro Bravo Inc since Toro Bravo opened in 2007 and has since worked at almost every restaurant in the company. Drew is the creative and driving force behind BYH Burgers alongside current BYH General Manager/partner Jamal Hassan. Jamal and Drew are both excited to create a community center in the luxury Atticus Hotel and strive to make BYH Burgers McMinnville’s living room.

The most Southern eff you there is.
Can be put at the end of a phrase to nullify any cruelty.