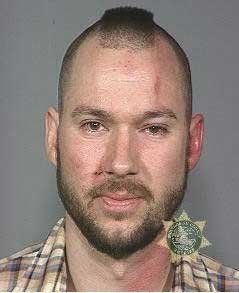 This story has gotten so bizarre, I wonder if Bechard’s restaurant “Thistle” will survive the scandal.

Some of the classy highlights that Willamette Week came up with today:

What did the Portland Police make of the situation? Glad you asked. Turns out that after our crew in blue pepper-sprayed and Tasered fighting foodies Eric Bechard (chef/co-owner of Thistle restaurant in McMinnville) and Cochon 555 co-founder Brady Lowe outside Magic Garden late, late Sunday night, they managed to pen some excellent prose. What it all boils down to is that most of the witnesses say Bechard started the ruckus. Bechard says Lowe started it. Bechard pushed Lowe’s girlfriend Carolina Uriba before the fight started. Davis Street Tavern co-owner Blake Smith showed up at the scene of the fight after watching Bechard head-butt a guest at the Cochon 555 after-party earlier that night. And another local chef, Travis Ingle, whose “tasty tattoos” (including ink that reads “Love the Knife” and “Born to Poach”) were recently featured in an Oregonian Mix article (link now broken), was also named as a “suspect” in the fight. Not only is the police report an interesting summary of the evening’s events, it contains the single most heartfelt reason for going out anywhere at night, offered up by chef and confirmed head-butter Bechard:

Do you want the classic next line? You can read it over at  (sorry, the link isn’t good anymore)

It’s pretty amazing–packed with Oregon vs San Francisco chef supremacy shout outs, strip bar love and even a quote with Bechard calling out one witness, saying he was “a bitch, a culinary student faggot and saying he could not cook.”

It’s enlightening, disturbing, and will cost Bechard his reputation. Too bad – he’s a talented cook. It also sounds like he’s a complete jerk. In my experience, alcohol usually makes people say what they really feel.