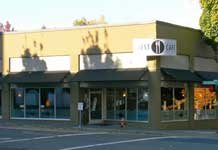 Westcafé is a a sunny downtown outpost offering brunch, lunch, dinner, happy hour, coffee, take-out, snacks, cocktails, and dog-walking (just kidding on that last one).
I am often in that neighborhood, and had been walking by Westcafé for months this past summer, curious to see what was going into the massive space. Westcafé sits on a mini-restaurant row on SW Jefferson, in the neighborhood between PSU and the Portland Art Museum. When the paper finally came down from the huge windows I could see beautiful, large booths and a fireplace surrounded by clusters of plush furniture. The finished space is comfortably elegant, with lots of light. There is a separate, adjacent storefront that serves as the deli/take-out and coffee to-go space. They have been open for about three months and I have visited a few times for dinner and drinks.

Service really stands out at Westcafé. It was prompt, informative and thoughtful. A hot towel comes with the spare rib sampler; cocktails and water are replenished speedily. You are not rushed, but you are not left waiting either. The servers and bartenders are cheeky and fun, and the atmosphere is light and relaxed.

There are a few pedestrian beers on tap ($4), and a nice list of cocktails ($7-$8). I can’t comment on the wine as I have only had a glass here and there. I had the tarragon martini, basil martini and a mint gimlet over the summer, and though similar, they were great, fresh way to beat the heat. They were still on the menu as of last week, though I understand they plan to update the list soon. More seasonal offerings include a Tuaca sidecar, which was described as ‘very metrosexual’ by the bartender who served it to my Teva- and Grammicci-clad husband. It was deliciously tart and potent, but even after two, my husband is still wearing sandals with socks. The bartender made my French 57 (gin, lime, simple syrup topped with bubbly) and pronounced champagne cocktails ‘so right now’. They are; I’d like one Right Now! Oddly enough, my current favorite cocktail on their list is a Maple Manhattan, made with, I kid you not, a drop of maple syrup and Maker’s Mark. There is a lot of sameness in the cocktail list. They need to shake it up a bit (sorry for the pun), and continue with the theme of modern takes on old-school classics. But the drinks are very well mixed and served with a punch-line.

As I mentioned above, they are trying to serve all meals, to all people, at all times. It’s like restaurant ADD. At first, I was skeptical of this huge undertaking. If you look at the lunch/dinner/take-out menus, you will see a lot of the same items. That simplifies things a little, though when I initially looked at all those redundant menus, I thought that the food would lack freshness. Even as I ordered on my first visit, I worried about when my entrée had been made…that morning? After the lunch rush? But it was a Monday, and there was no way I was ordering fish in a spanking new place during their soft opening.

Freshness is a factor with the food, even after three months open, and the kitchen has sent out some duds. I tried the grilled prawn and artichoke heart skewer ($6) a couple of times; it’s somewhat charred and tasteless. The Asian peanut-glazed baby back ribs ($6) starter was very good though, nutty and tangy. Two tapenades ($5, one of olive and the other of white bean), come out in a long olive boat with crostini and day-old, curled celery and carrots. I did really like the roasted vegetable lasagne ($16), with its layers of fresh basil and spinach — the flavors were really vibrant. The Moroccan chicken ($17) was hearty, but too sweet for me. Entrées come with a ‘whisper’ of salad dressed with a nice sesame vinaigrette. They also serve big baskets of olive bread and papadums with everything. The soups, meh. The crab and corn fritters, ho-hum. Nothing is awful (save for that prawn starter), but nothing is really special either. It seems like there just needs to be a lot of fine-tuning in the kitchen.

I really want Westcafé to work out its kinks. They are an asset to the neighborhood. The staff is wonderful, and the space is very nice. Maybe they need to offer less (perhaps eliminate the take-out, or open only six days a week, instead of seven), so that an actual chef can spend more time in the kitchen. Or maybe more training is needed for those who are doing the cooking when the chef isn’t in the house.

Without some needed focus, it will remain an okay neighborhood Café if you are West, but not if you’re North or South.