The owners posted the following statement on the door – 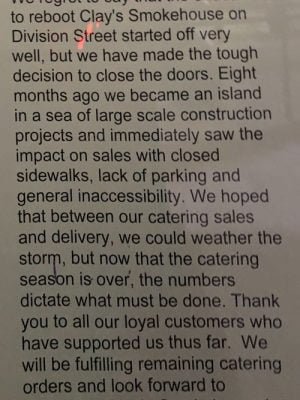 We regret to say that the endeavor to reboot Clay’s Smokehouse on Division Street started off very well, but we have made the tough decision to close the doors. Eight months ago we became an island in a sea of large scale construction projects and immediately saw the impact on sales with closed sidewalks, lack of parking and general inaccessibility. We hoped that between our catering sales and delivery, we could weather the storm, but now that the catering season is over the numbers dictate what must be done. We hope you will come out and join us tonight for a last supper and to raise a glass as we say farewell. Thank you to all our loyal customers who have supported us thus far. We will be fulfilling remaining catering orders and look forward to reopening Clay’s Smokehouse in the future. Cheers! Matt and Mike(s)

This is the second go-around for Clay’s Smokehouse Grill. It was originally located at 2932 SE Division but closed in September of 2016 with plans to open on property they owned in Milwaukie. Instead, they reopened in July 2017 just a few blocks away from the original location at 2365 SE Division St, Portland, which is now closing.

Lately, it seems like for every restaurant which opens, another one closes.

Thanks to our long-time reader/tipster!