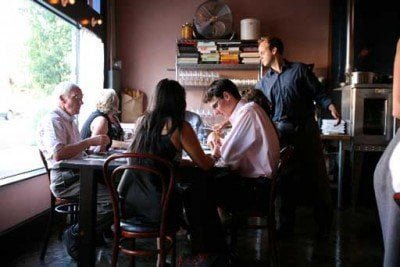 Just last week came the announcement that Bar West is opening in the Wildwood space with chef Lucian Prellwitz, who was chef de cuisine at Beast. Now we know who is taking his place – New Yorker Julian Calcott is the new chef de cuisine. Most recently Julian helmed the kitchen as part-owner and chef at the mostly small plate, Cherry Point in Brooklyn, NYC. Previously he worked with April Bloomfield at NYC’s The Spotted Pig. He is considered by some to be a charcuterie savant, something which Naomi Pomeroy, owner of Beast wants to take advantage of. From Eater –

Those who have been enjoying the lighter fare at the current Beast shouldn’t wince, however: While Pomeroy says the restaurant may dip back into the world of charcuterie, she says Beast’s current lighter fare — pastas, seafood — is integral to how the restaurant now works. “The way I work with all the chefs is collaborative. It’s a really dialogue-driven space, and that fits into menu development,” Pomeroy says. “Julian is excited about being produce-focused in his cooking… We’ll probably reintroduce that in-house charcuterie, which we haven’t done in a while, but the pasta stays.”

I think this is a great move for Beast. Over the past few years, when I run into someone who has been to the restaurant and I ask how their meal was, they invariably say something like, “It was good! I mean, not like it used to be, but still great.” I have a feeling this will bring back the original luster.