NOTE: This review has been replaced with a new, larger roundup, which you can read here. I have already rewritten and updated the recipe for making tonic water from scratch, which you will find here.

In January, I reviewed Q Tonic. Now Fever-Tree Tonic, another gourmet version has hit local store shelves. I thought it was time to go back and update this post with a comparison between the two.

Gin and tonic – what my dad would call “an honest drink.” No fancy juices – direct and to the point. Just about anyone should be able to take three ingredients and, measuring, come up with a good cocktail. Unfortunately, this doesn’t happen very often. The average bartender, whether at home or in a bar, grabs for a bottle of Schweppes, or even worse, squirts the tonic out of a gun, and ends up with an overly sweet drink that has little in common with the original concoction.

I was going to put some history of tonic water, but when I was researching it, I came across a great essay on the Q Tonic site. It is the best I’ve found, so I’m just going to add it here.

Tonic water’s story begins two centuries earlier, in 1638. The wife of the Spanish Viceroy in Peru, the Countess of Chinchon, had fallen violently ill with malaria. Her husband begged the local Incas for an antidote. In a show of generosity, the Incas instructed her to drink a potion containing the ground bark of the native “Quinquina” tree, which grew on the slopes of the Andes. The potion worked and she quickly recovered. In her honor, the Spanish renamed the Peruvian tree the “Cinchona” tree. They also killed off the Incas, stole their gold, and colonized their land.

The ground bark was then imported to Europe and quickly prized. But Peru prohibited exporting Cinchona seeds. So, as colonialism and hard-drinking officers created more need, the supply of Peruvian Cinchona bark could not keep up with demand.
Prices skyrocketed – at one point, the cost of the bark powder was its weight in gold – and the bark was overharvested. The Cinchona tree became nearly extinct.

In a coup reminiscent of coffee’s spread, 1862, Charles Ledger smuggled Cinchona seedlings out of Peru and sold them to the Dutch government. Holland set up large plantations in Java, their colony in Indonesia.

Until World War II, Indonesia supplied almost 95% of the world’s quinine. However in the winter of 1942, Japan attacked and took control of Indonesia to secure oil for its war machine. With battles raging in areas with malaria, the Allies established a mini-Manhattan project, charging scientists with finding another source of quinine. The group soon discovered a way to produce a synthetic substitute. Following the war, the corporations producing tonic water elected to switch to this cheaper, artificial quinine. Tonic water lost the authentic ingredient that had defined it for centuries. Over the last few years, however, there has been resurgence of interest in the original quinine water.

At first, Q Tonic dominated boutique grocery store shelves, but now Portland is starting to have a choice, with the addition of Fever-Tree Tonic Water. Two things catch my eye: First of all, the bottles are quite nice – I’d even call the Q Tonic elegant. The prices also catch my eye. I’ve seen them between $2 and $3 per bottle, which the packaging claims is the perfect size for one drink. For that reason, I never bought any until I ran out of my homemade tonic.

If you’ve ever compared really good tonic water to the more common mass-produced brands, you know what a huge difference it can make. Looking for the reason, a comparison of ingredients is a good place to start:

While it’s nice to have a tonic with natural, healthy ingredients, what matters more is the taste. I recently sat down with fellow gin lover Nancy Rommelmann for a comparison.

The first thing that got our attention was the smoothness of both Q Tonic and Fever-Tree. I could see drinking either of them over ice. This is something I would never try with the mass-produced varieties. Q tonic has a somewhat medicinal taste from the cinchona bark, which reminded me of my homemade tonic. I also noticed a very slight tartness and tang, and a clean-tasting light fruitiness that matches the elegance of the bottle.

Fever-Tree is a bit lighter. The aroma is fresh and citrusy, as is the taste. It is quite a bit smoother than Q Tonic; balanced and very easy to drink by itself. My only complaint is that the flavor is a little bit too limey; but for those who prefer their tonic drinks with lime, this may be the best choice for you.

The particular characteristics of various brands of alcohol make a big difference in how well they match with mixers. I’m not a huge vodka fan, but over a few evenings, I tried both brands with several varieties. Every version of Q Tonic vodka tonic was excellent; a good match that perked up even the banalest vodka. Fever-Tree didn’t fare so well with me, I just didn’t care for it with Vodka.

Mixing them with gin was a slightly different experience. I had to determine if I was looking for the authentic, somewhat medicinal clash between the two liquids, or complementary smoothness. It is definitely a matter of personal taste. For a smoother, citrus taste, I would go with Fever-Tree, but for a more homemade, traditional tonic taste, I choose Q Tonic. Both, however, are excellent, and far better than Schweppes.

With gin, the brand you use makes a big difference. Of course, all of them need to have juniper as their dominant flavor, but other botanicals distilled into each set them apart. My everyday drinking gin is Plymouth because it is decent and relatively inexpensive. I thought the two worked well together; though the tonics tended to overly smooth some of the herbaceous notes. If you like a really mellow combination, this might work well for you. The same was true with some excellent Bluecoat American Dry gin I had leftover from Tales of the Cocktail. With big gins like Beefeater, I found it completely overwhelmed – you might as well use soda water. 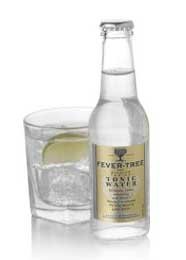 When it comes down to it, the tonic you are going to like depends on your personal taste and what brand of liquor you want to mix it with. The biggest question is whether the boutique versions are worth the price. I like my own recipe, and if I had lots of time and energy, I’d make it every time. However, both of these tonics will satisfy; chose by the characteristics that are important to you.

Whatever direction you take, enjoy your drink, and think about this: Tonic water will fluoresce under ultraviolet light. In fact, the sensitivity of quinine is such that it will fluoresce in direct sunlight. Make a drink and go outside to frolic on a sunny day. It’s for science!