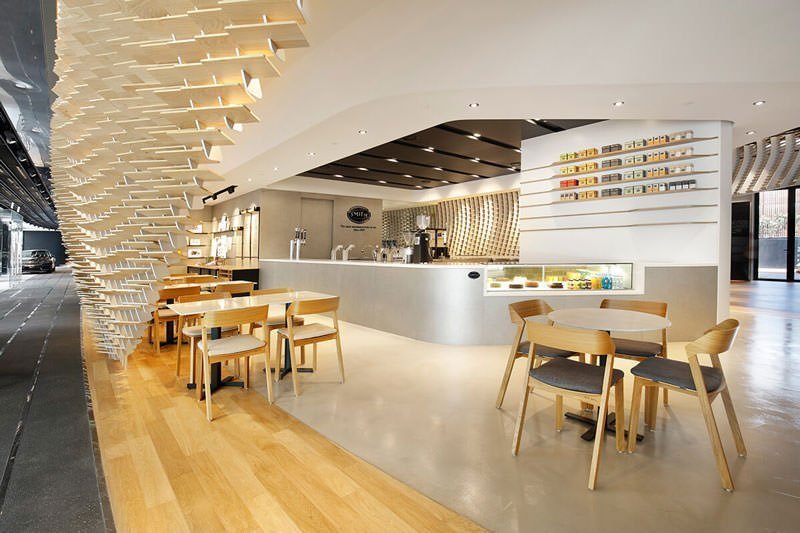 Smith Teamaker has opened a location in Seoul. Here is the press release –

For the last 4 years, we have partnered with Orefarm in Seoul.  Under the leadership of Orefarm’s Hosik Chang, the Smith Teamaker brand has flourished in Korea.

We are so pleased to announce the opening of the new Smith Teamaker Café – Beat360.   With a shared vision and passion for Smith Teamaker products and brand, the collaboration with Hosik and his team is something we are very proud of and look forward to continued success.  Tony Tellin, our head teamaker, and ML Warhus, director of tea, recently visited the team in Seoul to train the team on tea lattes, teas on tap, tea smoothies and more.

Check out images from their trip and learn more about the new café here.

In early 2012, a Mr. Hosik Chang stopped by the Smith Teamaker booth at the Baltimore Natural Products Expo. Through his interpreter, he told Steve that he was starting a business to import Oregon-made goods into South Korea and wished to offer Smith Teamaker to his new customers. He also wanted to open a café similar to our tasting room in Northwest Portland. Hosik had no experience in food or beverage, or importing goods for that matter. Steve was interested, however, just cautious, as he was not ready to focus on having a café outside of Oregon and because he was worried about quality and execution.

Hosik walked away from this discussion excited and inspired; he did his homework and stayed in touch. It didn’t take long before we came to respect his passion, business prowess and attention to detail. Later in the year we released a shipment of Smith products to South Korea and ever since then you can find Smith Teamaker at better restaurants, hotels, cafes and bars throughout Seoul.

Get The Full Story

We’ve talked a lot about Smith Teamaker before, and are enthusiastic visitors to their Portland tasting rooms. You’ll find an interview with founder Steven Smith here.